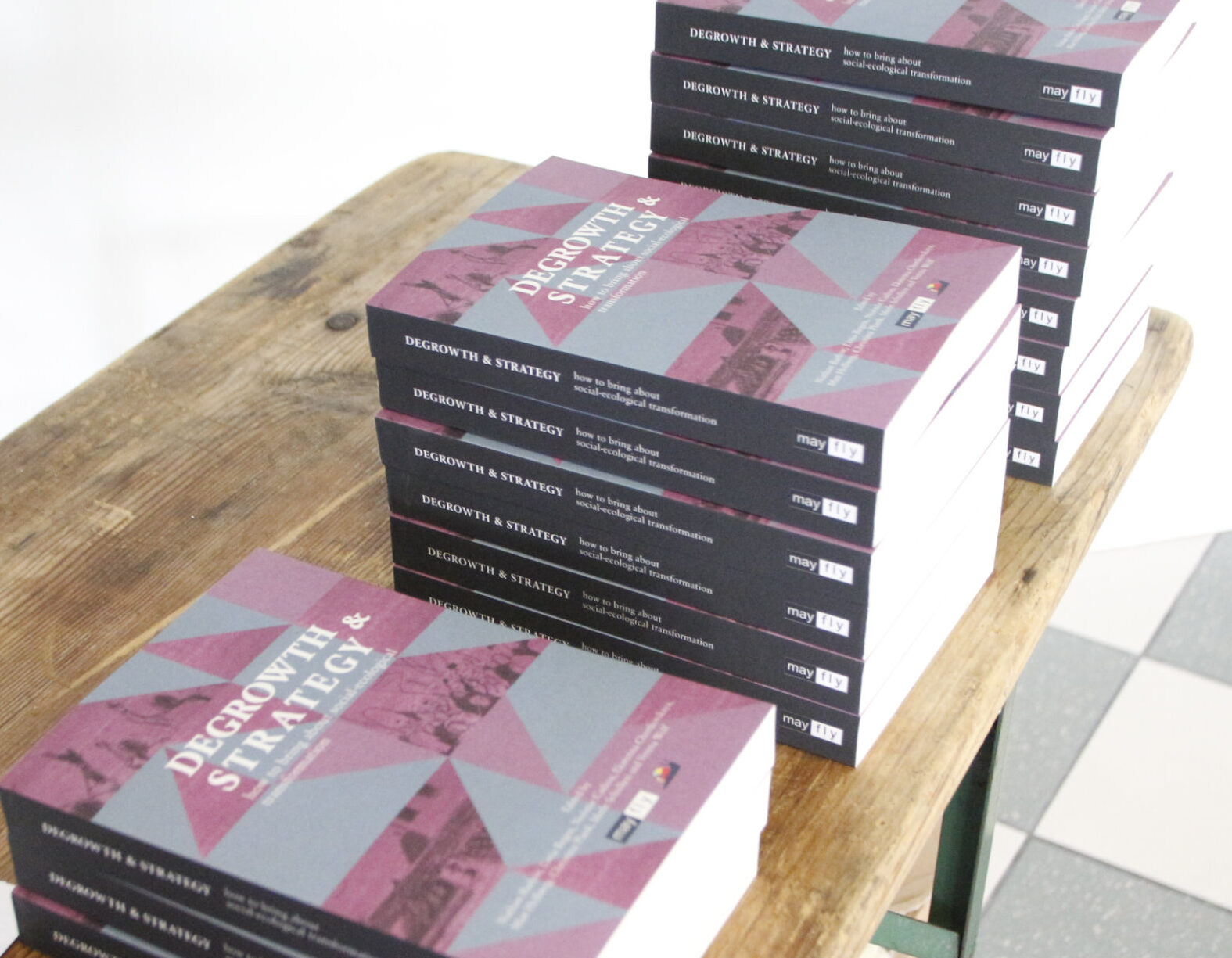 Degrowth & Strategy is an impressive collection of essays by a variety of people on strategies to implement degrowth. (The price is right, too – get an e-copy for free on the publisher’s website!)

Serious environmental crises precipitated by continual economic growth now threaten the basis of human civilization. Climate change is the best known, but more wait in the wings: mass extinctions, peak oil, overgrazing by cattle, deforestation, water shortages, soil erosion, and others. At the same time governments, and even many environmental groups, are paralyzed, unable to act. We urgently need degrowth and social-ecological transformation, but how do we get there? That’s the subject of this well-timed book.

Degrowth & Strategy is not for the faint of heart! It’s somewhat lengthy, covers a lot of ground, and sometimes presents considerable detail. The literally dozens of authors are smart, young, and very well informed; many of them are academics. The book doesn’t use many technical terms or require special knowledge or advanced degrees, just intelligence and patience.

The degrowth movement is interested in issues that frequently overlap with those of American ecological economists like the late Herman Daly and groups such as CASSE (The Center for the Advancement of the Steady-State Economy), with which I am more familiar. But degrowth is broader, often focusing on cultural issues rather than economic ones, and is ideologically quite diverse. Degrowthers range from people interested in community gardens, to pragmatic reformers (Daly would likely fall here), to socialist revolutionaries. Yet, somehow, they all understand the destructive nature of economic growth.

For me, one of the book’s most charming features is the window it provides for outsiders into the degrowth movement in Europe. The degrowth movement is mostly European, mostly middle-class, mostly white, mostly academics, and mostly involved in research. But based on this book, it’s also determined to reach out beyond this sphere, which is both difficult and excellent.

The book consists of nineteen essays (plus an introduction) by dozens of different authors, that are divided in two parts. Part I covers just what strategy is and the degrowth movement’s major options. Part II concentrates on more pragmatic issues such as food, banking, and housing, but all coming back to the central question of strategy.

Chapter 1 summarizes the whole problem of degrowth and strategy, but is quite dense -more of a “synthesis” or “conclusion” chapter, than something to warm up readers for the rest of the book. I’d suggest for readers unfamiliar with degrowth that you start with chapter 2; otherwise, you may never make it to chapter 2! Coming back to the first chapter after reading most of Part I makes a lot more sense.

The first half of the book helps clarify the whole problem of strategy. Suppose we in the USA want to “cut advertising” (Jason Hickel, Less is More, p. 213) as a degrowth measure. Well, how do we do that? Storm the halls of Congress? Lobby our representatives to pass new laws? Or perhaps we should just avoid politics and retire to our rural self-sufficient communes?

For Degrowth & Strategy, those are broadly speaking our three main strategic alternatives, as articulated by American Marxist Erik Olin Wright. I hadn’t read any of Wright’s books, so I experienced a brief moment of panic when I saw how heavily they were going to lean on his ideas. I needn’t have worried; the authors explain very well most of what you need to know about his ideas.

The strategic alternatives are (1) “ruptural,” such as street blockades, disrupting meetings, or rising up in revolution; (2) “symbiotic,” such as working through the system to change it; or (3) “interstitial,” which roughly translates into ignoring the system, or working around it, for greater self-sufficiency. This basic strategic outline runs throughout the book.

Several essays emphasize the importance of social justice, without which much of our degrowth message will fall on deaf ears. Very few want to see the environment protected at their expense, as France found out during the “Yellow Vest” protests in 2018 in response to a rise in fuel taxes. And a number of essays discuss the importance of establishing dialogue between the different elements within the degrowth movement itself, which is by no means a cohesive whole. The broad diversity of degrowth is both a problem and a strategic asset.

Part II is more practical. How is degrowth working out in practice? Part II discusses, first of all, “provisioning sectors,” which are food, housing, computers, energy, and transportation. It then provides four essays on “economic and political reorganization,” covering such things as health care, employment, banking, and trade.

I found chapters 11 to 14 to be especially relevant. Chapter 11 covers food, but in particular food provisioning – home gardening, food coops, CSAs, organic agriculture, or at the end of “ruptural” strategies, land reform and occupying land. I was pleased to find out that, by inviting community gardeners into our back yard, I was “practicing degrowth” without even knowing it!

Chapter 12 (“Urban housing”) suggests ways of addressing homelessness, which is a big problem in our city – yet developers continue to build more “McMansions” for rich people. This chapter gave me a bit of history (of “Red Vienna” in the period before the Second World War) with which I was totally unfamiliar, and some new ideas as to how to approach the problem.

After a career in information technology, I was especially interested in chapter 13 on digital technologies. Two impacts of digital technology on society are especially important: its impact on resources, and its impact on society. Information technology takes metals, mining, and energy, and this has a significant and largely invisible environmental impact. And we have seen the huge problem with social media, which has taken public discourse in an entirely different direction than what we’ve historically known. It’s been plausibly accused of making Donald Trump President in 2016, not to mention leading to depression, suicides, and consumerism. Two other considerations may be relevant. (1) There is a potential conflict between digital technology and modern renewables like wind and solar, which both require many of the same rare earth metals. This raises questions about whether we can really have both in the long run – or for that matter, whether we can have either in the long run, since these metals are functionally finite, just like fossil fuels. (2) Even when social media sites like Facebook work as intended, what is that intention? It is to advertise, thus furthering consumerism.

The authors of chapter 14 (“Energy”) also have a good grasp of the overall problem. Renewables are not the easy solution that many proponents of the Green New Deal (in the USA) believe it will be. They still require resources; wind is free, but wind turbines (and the metals and resources to build them) are not. They also have a low “energy return on energy invested,” so at best, we will wind up with less energy than we have now. I will add that because of “peak oil” it is possible, perhaps likely, that we will ultimately have less energy than we have now, even if we stick with fossil fuels – Mother Nature’s degrowth strategy. Therefore, there is no alternative, really, to cultivating low-energy alternatives (such as a vegan diet).

Based on Degrowth & Strategy, it doesn’t seem that we have to choose between any of these strategic options. We could continue to explore all of them, and stay in contact with others with different views, while generally furthering the message that economic growth is destructive.

I would include a pitch for one additional topic. It is quite doubtful that we can achieve social-ecological transformation without integrating plant-based diets into our strategic plans somewhere. Humans and their livestock constitute over 95% of the large land animal biomass, with massive destruction of habitat and biodiversity. Livestock agriculture may be responsible for about half of all greenhouse gas emissions, and consumption of animal products is the leading cause of death in the USA. I know that plant-based diets can be a contentious topic, but I’m sure that degrowth circles could find friendly vegans with whom they could be in dialogue. Tobias Leenaert has contributed his own thoughts about (vegan) strategy, though not from a degrowth perspective.

In summary, Degrowth & Strategy is a detailed, dense, thought-provoking book which will likely be the starting point for future discussions of strategy. My congratulations to the authors, and I hope that it will open minds everywhere.

Keith Akers is a writer, speaker, and activist, who blogs at Compassionate Spirit. He’s also the author of Disciples (Apocryphile Press, 2013), The Lost Religion of Jesus (Lantern Books, 2000), and A Vegetarian Sourcebook (G. P. Putnam’s Sons, 1983). In his former life as a computer consultant, he worked on projects with the US Departments of State and Education, American Management Systems, Bell Atlantic Nynex Mobile (now Verizon), and others.